Did you know that today’s highly engineered household (domestic/ exempt) well, used in conjunction with an efficient septic system, represents the most efficient means of drawing and restoring water ever known to mankind?

At this juncture, you may be asking WHY is the above described water use and restoration system superior to the most common means for accessing water through typical, municipally-operated, piped-water and piped-sewerage infrastructure?  Listed below are 4 substantial reasons why:

• Unnatural Water Extraction and Transfer: Today’s piped water infrastructure often involves centralized, large scale groundwater withdrawals. In regional systems, extracted groundwater may be piped far away from Its original withdrawal point. Centralized wastewater systems further compound the problem by collecting the used groundwater, treating It, and releasing the water into a stream. The receiving stream may be, located in or flowing to, a different hydrologic basin from where the groundwater would have naturally discharged, creating a diversion of water from one basin to another. Rather than renewing the original groundwater supply at the location from which it was originally taken, it flows out of the system. Even worse though, is what often happens downstream. With seasonal flooding episodes, property damage and infrastructure devastation sometimes lead to significant regional water contamination caused by over-burdened storm water and sewage treatment facilities.

• Water Leakage: According to Washington State’s “Partnership for Water Conservation” report on the implementation of water use efficiency, “the average piped water leakage amount was 11.5% according to a statewide survey conducted with municipal water suppliers.” Furthermore, It’s important to consider… piped-water leakage represent an inherent inefficiency that does not apply to household water wells.

• A Stark Contrast vs. Typical Piped-water Methods… today’s rural residential household water well consumption efficiencies remain unequaled. When considering the efficiency marvels of household water well consumption versus typical piping methods, the vast majority (up to 90%, utilizing our state’s Department of Ecology published statistics) of the originally drawn, household-use water, is returned to an on-site septic system and back into a nearby aquifer to be used again – Instead of being transported some distance away. Therefore, the average person utilizing water drawn from a household well actually uses a net consumptive water amount of just 8 to 10 gallons per day.

Between 2014 and 2016, Washington D.C.’s Water Systems Council in conjunction with the Water Well Trust, worked together to pass and enact into law with substantial bipartisan support -our nation’s “Water Supply Savings Act H.R. 3533 /S. 1642” – substantial nationwide legislation that requires federal agencies to further consider and favor the implementation of water wells for supplying drinking water to smaller communities.

This substantial {President-Obama-years’) U.S. Congressional act is aimed at reducing expense to federal, state, and local governments when providing quality drinking water to millions of Americans living in rural communities by promoting more efficient, cost-effective community water systems, thereby realizing a cost savings of as much as 86% over the use of conventional – piped water – drinking-water systems, representing a win for rural America and taxpayers alike.

Today, statewide, more than a million residents (15% of our state’s population) depend upon household well water as their sole dally water-access source.

Washington State, with Its current population of 7.6 million residents, living within 2 distinct mountain ranges, amongst abundant river and stream flows, along with generous seasonal precipitation, doesn’t experience an overuse of its water resources. The key to our collective water future lies in being proactive and investing in current and future seasonal water capture and storage mechanisms.

Further confirmation to the above referenced water-use fact is clearly set forth In a “‘World Resources Institute” chart published during August 2019, further illustrating the verity that our state of WASHINGTON represents one of our nation’s least impacted water stress states’ – using less than 10% of our state’s water stores each year. 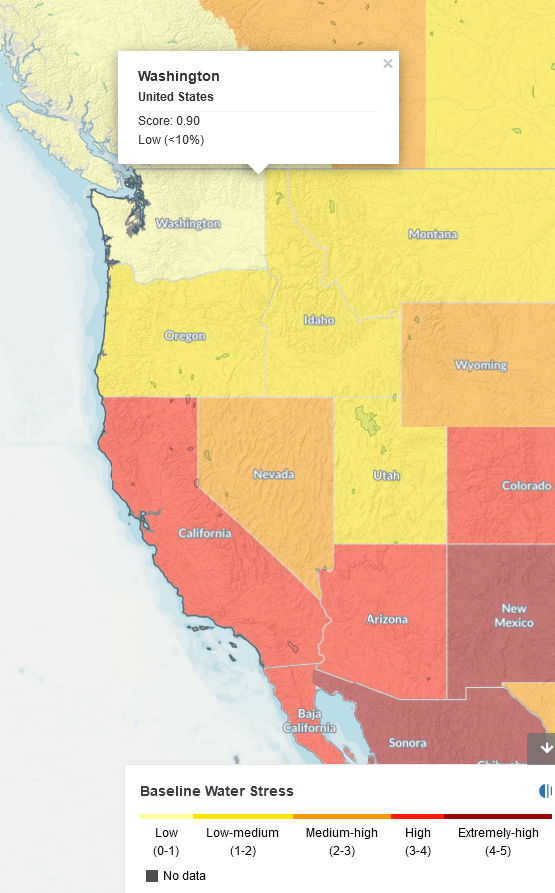 This information is supplied by Washington State Ground Water Association, a dedicated, experienced and professional 72-year old statewide groundwater-focused group – consisting of state licensed, bonded, certified and insured water well drilling contractors, hydrologists, hydrogeologists, and engineers. A fact-based group who precisely understands the science and nuances of groundwater across our state. This is why, legislatively, years ago, our association became an entrusted party within Ecology’s Well Construction Division, an important segment of Ecology’s statewide Water Resources Program, known as its “Technical Advisory Group.”

How Does NASA Measures Groundwater Beneath the Earth, and What Does It Tell Us?